Coach Moss began his coaching career as a teenager helping his father coach various teams in Mandeville, LA. He has coached the 05 girls since they were in the 9U Academy and spent several years at Burnside Park experiencing the best recreational soccer program in the state. He has coached at every level in the club including our 4U First Flight (formerly Little Kickers). He is also the Assistant Boy's Coach at Dutchtown High School.

Growing up a coach’s son, I always wanted coach youth soccer. When my oldest child was old enough to play, I got back into coaching and enjoy spending time with our players. Most importantly, I enjoy being a positive influence on the players both on and off the field and look forward to igniting their love for the game.

Coach Moss has been involved with Flight since 2010 when he was league rep for the 6U girls division. In the Fall of 2012 he joined the club Executive Committee as the VP of Education and Training and then became club President in February 2013. In 2013, he setup Flight's first Academy structure and continues to lead the club’s, development first strategy.

Flight has been our home for many years and our soccer family continues to grow with each new season. We are lucky to have many volunteer coaches, board members, managers and others who make running a club our size look very easy. Our club is a family, we work together for the betterment of all players in Ascension Parish. 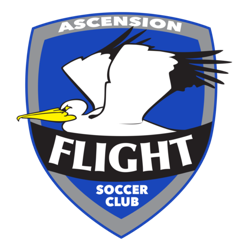